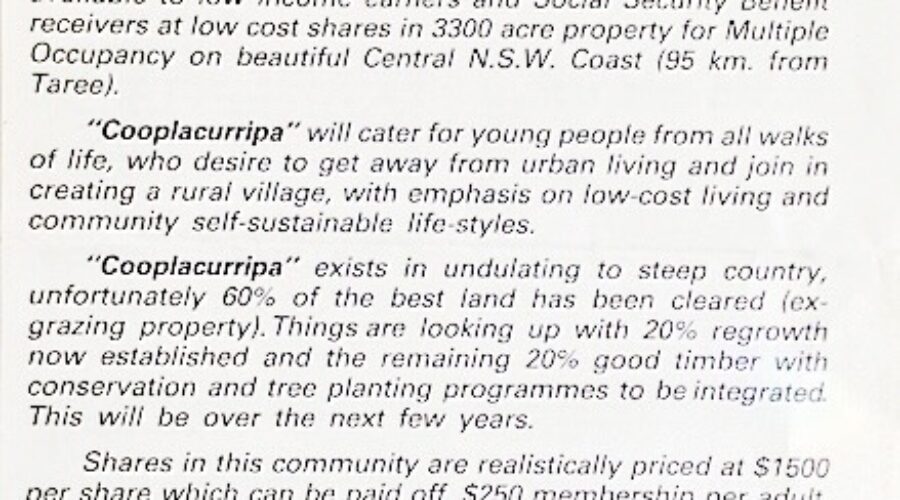 A community that never was

The artefacts of our permaculture journey…

With a story spanning close to 40 years, the permaculture design system has left a trail of artefacts. Sometimes in plain sight, sometimes hidden and forgotten, these we explore in our archeology of our design system…

HOW DOES A SHARE in a rural community on well-watered, sloping land for AU$1500 with access to 1.2ha of land for your own use sound?

Too good to be true? No. It wasn’t. It was a serious offer back when it was made in the early 1980s.

Maybe its time for a little historic context…

Back to the land

The brochure and its land-sharing scheme are an artefact of what is sometimes called the ‘back to the land’ or the ‘alternative’ movement that spanned the 1970s and into the 1980s. The movement, as university researcher Peter Cock found at the time and published in Alternative Australia, his book, amounted to tens of thousands of mainly young people searching for a better way of life than mainstream consumer culture offered them at the time.

A poorly-defined mindset guided those setting out on that search for new lifeways. Now, that type of motivation, that search for a better way to live, is sometimes channelled through permaculture which offers a set of conceptual, theoretical and practical tools through which to approach this sort of life-change… a framework.

Those who left the cities headed for rural towns or set up new rural communities on old farms, the intentional communities of the time. Some of these still exist.

They were called ‘intentional’ communities because people got together to form a group with the intention of buying land and starting a community. This was different to today’s ecovillages which are generally developed as subdivisions them sold to buyers with roads, services, water storage and other facilities built or already planned.

The Cooplacurripa brochure appeared at a time when there was interest, including in government, in rural land-sharing communities as a solution to unemployment and other social issues.

Legal title was to come through the NSW Multiple Occupancy Act introduced by the Wran Labor state government around 1980. The Act was introduced to allow multiple dwellings on rural land and to get away from the issues around what local government viewed as unapproved and illegal dwellings that had been built on the early intentional communities.

The brochure circulated around alternative communities in Sydney. I link it in my mind with Steve Ward, an early populariser of the bioregional idea in Sydney who did his Permaculture design course, one of the early courses, with Bill Mollison over in Aotearoa/New Zealand early in the 1980s.

Steve was something of a journalist and went on to publish Village Voice, a local newspaper that circulated in Bundeena and Mianbar, two villages on the Georges River estuary on the edge of Royal National park, on Sydney’s southern edge.

Unfortunately, Cooplacurripa never eventuated. The reasons for that are lost though I have an inkling of a memory that associates it with a change in state government attitude, perhaps a change of government, but just how that affected the project I don’t know.

Cooplacurripa was a recognition, an aspiration, that a different way of life could offer young, low income people opportunity and a better way of life. It was as visionary as it was innovative. Would Cooplacurripa have done that for its residents?

That we will never know for it was an opportunity lost.

Other stories in The Artefacts of Out Permaculture Journey series…

The building where it all began
http://pacific-edge.info/2016/07/the-building-where-it-all-began/

Artefact a list of global permaculture organisations of the past
http://pacific-edge.info/2016/06/artefact-a-global-list-of-permaculture-organisations/

A community that never was
http://pacific-edge.info/2016/05/a-community-that-never-was%EF%BB%BF/