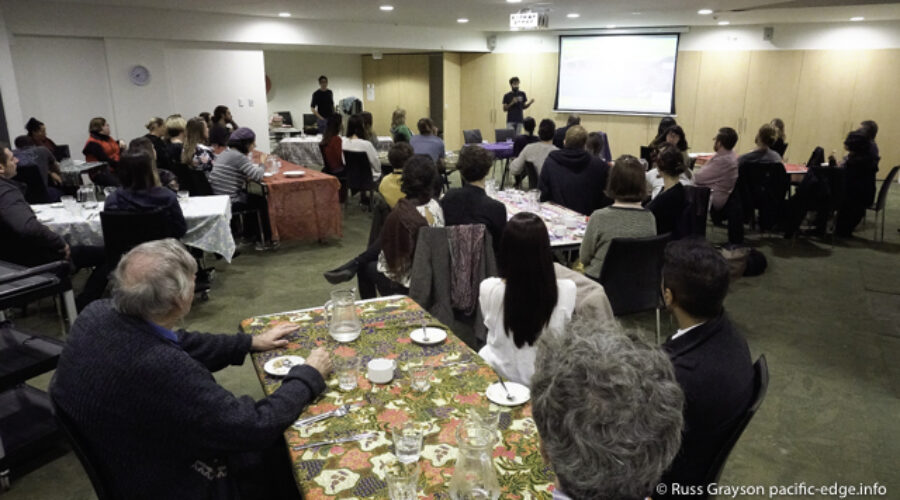 LIKE A CHRYSALIS EMERGING from its cocoon, a new economics is emerging from the dysfunctional body of the old. This new, humane economics got a hearing at the Transition Bondi seminar on 15 June this year.

Transition Bondi, operating around Bondi Beach in Sydney’s Eastern Suburbs, has been running its community education program for some years now and continues its tradition of providing a meal of mainly local, organic food at its events. Convivially prepared by a team of volunteers, the food is sourced from the Sydney-region vege-box service (a hybrid community supported agriculture scheme), Ooooby.

The event attracted a full house and, after an introduction by Transition Bondi’s Lance Lieber, a bowl of mushroom soup and the main course, the evening started with the film, A New Economy.

For anyone unaware of the alternative strand of economics coalescing around them, the film was an eye-opener. It focuses on the new economics developing in Canada, yet it is a new economics and an old, reformatted economics at the same time. That is, is takes established economic structures like co-operatives and social enterprise and reinvents them for contemporary times, adding digital platforms. A commercial urban farm, a microbrewery, a collaborative electronics working place, a hotel converted into a co-operative accommodation enterprise and Loomio — a decision-making platform resembling the sociocracy process of effective decision-making — were featured. Loomio was developed by a New Zealand co-op based in Wellington and has now been adopted by a diverse range of organisations worldwide.

Annette Loudon — the digital maven who has worked on the software enabling trading through Local Exchange and Trading Systems (LETS), the community-based, cashless, mutual credit systems that are part of the new economy and that have been operating in Australia and elsewhere since the late-1980s (LETS featured in permaculture design courses; permaculture did much to promote LETS) — introduced the speakers following the video.

The first was Michael Zagordis, manager of Pocket City Farms in Camperdown in inner Sydney. A small, commercial market garden supplying local people and restaurants with fresh, organically-grown produce, the farm has garnered considerable community support. Operating as a social enterprise, the farm is branching into associated, revenue-raising activity such as yoga and community education and is interested in setting up associated farmlets elsewhere in Sydney.

The second speaker was Robert Rosen. Robert was one of the people who set up the permaculture Earthbank initiative in the early 1980s to promote the then-emerging social (aka ‘ethical’) investment industry (and here) and to develop community economic systems. A businessman, entrepreneur and economic adviser with a focus on socially-beneficial enterprises, Robert works with community-based renewable energy investment schemes such as Pingala solar energy co-operative in Sydney (and here and here.

As a commentator said in the video, the new economics goes beyond Twentieth Century capitalism and socialism. It forms a major element in something new that is emerging — the co-operative commonwealth.

The co-operative commonwealth is a concept incorporating a host of ideas and initiatives that are appearing as a response to the shaky and often-destructive neoliberal economics that besets the modern world. It incorporates a range of initiatives:

The new economics in Australia

The first iteration of a new economics organisation in Australia was set up by then-architect, Michael Burnley and others in the 1990s and was based on the New Economics Foundation in the UK (the author was a member an edited their quarterly journal). Now, the New Economics Network Australia (NENA) is leading development. Standing room only at NENA’s two-day conference in Sydney last year attested to the growth of the movement. That is likely to be repeated at this September’s conference in Brisbane.

Attendees at Transition Bondi’s new economy event were a mixed lot, a range of ages and a range of backgrounds.

The organisation’s monthly talks and videos range widely across the socio-environmental-economic landscape to bring us not only the opportunity to network and to hear and meet people doing worthwhile things, but to bring us opportunities where we might find our own niches to take action towards a better society and way of life.