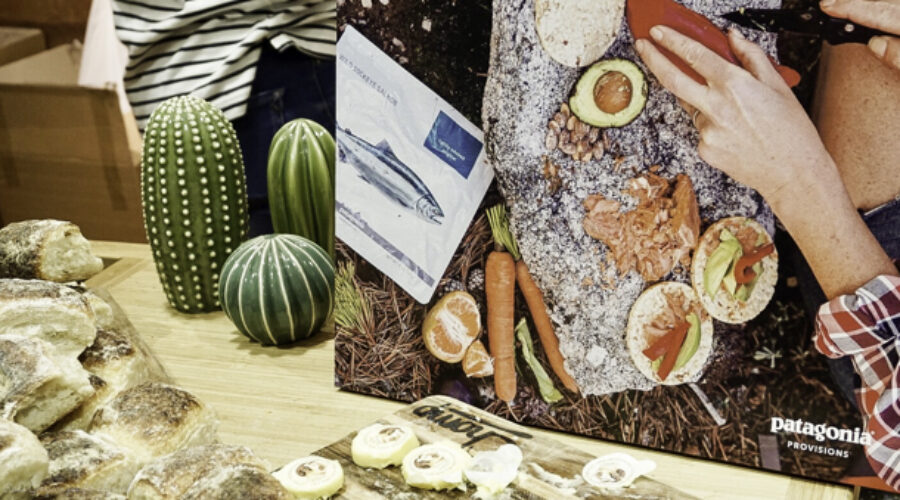 Around 80 people crammed into Patagonla’s City Store on a night last week for the launch of Patagonia Provisions, the company’s line of dehydrated foods for bushwalkers and mountain travelers.

The launch was accompanied by the showing of Uncommon Ground, a film featuring regenerative agriculture and fisheries in the US. The Patagonia Provisions film takes us to Wes Jackson’s Land Institute, a fishing co-op that sustainably harvests salmon, researchers developing a perennial wheat that is a hybrid of wheat and prairie grass and which enables no-till grain cultivation, and a farm grazing North American buffalo on the prairie as a source of low-soil-impact meat.

Patagonia has been selling their dehydrated foods for several years in the US and for a year in Japan. As well as salmon, vegetarian options are on offer and some of the lines are acceptable to vegans. There’s also a line of snack bars for mountain walkers in need of a quick energy injection to get them over the next pass.

Patagonia Provisions were on offer to those attending the film and launch. I tried the black bean and the lentil soup. It’s a long time since I’ve eaten dehydrated bushwalkers’ food so its probably not fair to compare, however the Patagonia offering was far superior to what I last ate as dehydrated food. The soups were tasty and filling. Fiona Campbell, Randwick Council’s sustainability educator and no stranger to trekking the high country, accompanied me to the event and tried the Patagonia Provisions salmon arrayed on lettuce leaf. She pronounced it good.

The event provided an opportunity to speak at length with the store manager, who also heads their sustainabilty program. He explained how Patagonia had just made a distribution of grants to environmental organisations. It was good to talk to someone in an industry I spent years in, years ago.

Another initiative into the business of remaking bushwalking foods and reforming the food industry has seen Patagonia co-operating with food advocates, farmers and scientists to create Regenerative Organic Certification. Intended as an add-on to existing organic certification, it will identify products that not only hold farming in the statis of sustainability but identify those that regenerate natural resources such as soils.

Advocates have long-wanted businesses to take action on environmental and social issues without the greenwashing that can accompany corporate initiatives. Patagonia, which makes adventure clothing and equipment for mountain sports, surfing and trout fishing, has been the leader when it comes to doing this and is attempting to improve its materials supply chains.

“When Trump won, the company opted to give away all its profits on Black Friday to environmental groups. Sales totaled $10 million, and Patagonia attracted 25,000 new customers.”

A recent report in Outside, the adventure sports magazine, described Patagonia this way: “Patagonia’s campus has the feel of a food co-op crossed with a ­liberal-arts col­lege crossed with a surf shop. Its defin­ing elements include a next-­generation gear lab and a day care center.

“When Trump won, the company opted to give away all its profits on Black Friday to environmental groups. Sales totaled $10 million, and Patagonia attracted 25,000 new customers.”

“If you want to change government, change the corporations, and the government will follow,” Patagonia founder and one-time climber dirtbag, Yvonne Chouinard said.

A friend, Tony Jansen, is a long-time worker in international development with whom I worked on projects in food security and farming systems in the Solomon Islands. He is also a surfer. Once in Byron Bay, I commented on the faded Patagonia Tshirt he was wearing. He said that he had worn it for years and it was still in good condition. Tony is now based in West Africa but what he said is said by others too — that Patagonia clothing might cost more but it lasts a lot longer. Add the company’s sourcing organic cotton and use of recycled polyester insulation and nylon in manufacturing and what you have, I suggest, is a company worth supporting with our dollars.

For surfers, the company is moving away from using neoprene for wetsuits and is replacing it with wetsuits made of natural rubber from the hevea tree that is grown in Guatemala. It is  a material extracted from a perennial tree crop.

Oh, yes… under the banner of ‘Repair is a Radical Act’, Patagonia offers free repair for its clothing and equipment through its Worn Wear program. This stands in stark contrast to the wear-it-once-and-toss-it attitude of the fast-fashion industry. It also reaches back into the patch-it-up-and-make-do past of the early climbing, bushwalking and surfing culture. The Sydney store’s Worn Wear Repair Hub has a young woman with a heavy-duty sewing machine who is ace at patching and sewing stuff.

Chouinard admits that the company has far to go along the road to product sustainability and reform of its supply chain. The significant thing, though, is that Patagonia has started and is making progress, which is far more than other companies in the adventure clothing and equipment industry have done although there are signs that some are starting to make moves in sourcing sustainably produced materials. It is for doing this, and for their grants to environmental organisations, that Patagonia has won the respect of people active in outdoor, mountain and surfing pursuits.

In supporting regenerative agriculture, Patagonia Provisions is another step along that road.

Patagonia has started its environmental advocacy work in Australia: