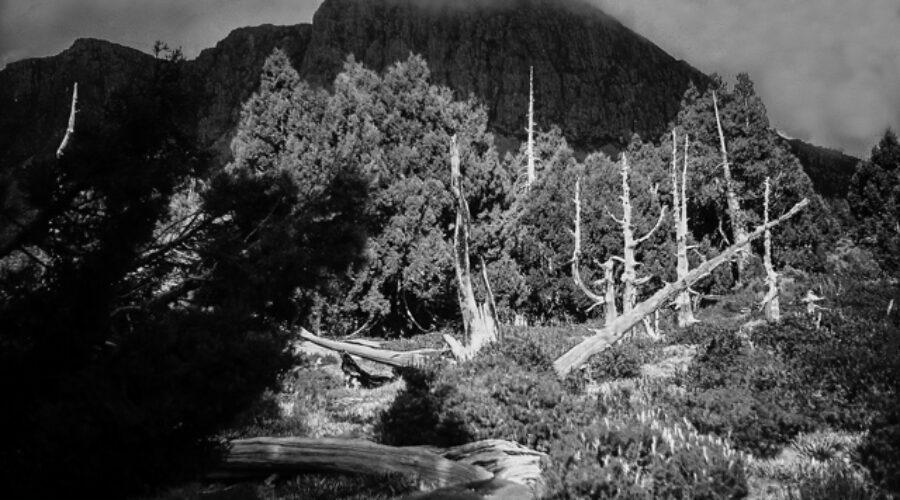 Across the Fish, a journey into memory

IN SPATE late that day
The Fish River
At the base of the escarpment
Up which we ascended through forest
Dripping with moisture
From recent rains.
Last I came this way
There was only a slippery log
Upon which to cross
And a length of fencing wire as handhold
That gave a false sense of security
When the Fish was flowing strong.

Camp that night at the top of the climb was Trappers Hut
Made a century past of local timber from the forest
To shelter fur trappers
And rebuilt over the years
Rudimentary but more than adequate.
A welcome appearance, that hut
On the edge where the sweat-inducing steepness of the climb through the moist forest
Flattened at the lip of the Central Plateau.

There we settled, taking sleeping bags from packs
And unfurling them on the bunk so that they would puff up
To be ready for us as the mountains faded into night and the cold air settled.
Light was starting to fade, the sun now gone when we reached that hut.

There was wood for a small fire
We prepared a simple meal
There, where the climb up the escarpment flattens at the lip of the Central Plateau, where that little timber hut nestles into the forest, a one pot meal for energy tomorrow
It was one of those meals such as we made when traversing wild country
Meals such as are made by all who are called to the mountains’ ruggedness, to their forests and their weather that so quickly changes.

We washed the billy and put it on the fire again
To brew strong tea such as is preferred
By those who walk these landscapes.

It was summer and we were blessed with days of weather, stable and fine
We moved past tarn and pine and big mountains appeared on the horizon under a wide, blue sky
They were our destination, towards which we walked hour by hour
Through scattered alpine pines unique to this place, to these altitudes, to this rugged island
Past large ponds and small lakes that the locals call tarns.

For this weather we were thankful
I had been to this place in conditions foul
When visibility was poor, the landscape monotone, the tarns frozen
And the mountains hidden behind the scud of blizzard
When hours were spent pushing through deep snow to go only a short distance
Trail-breaking in turn, so exhausting it was
As we evacuated that casualty.

We walked in silence as we followed one another along the narrow trail
Because this was a state of being the mountains induced.
When we talked it was quietly
As if we didn’t want others to hear
Only there were no others those couple days up there in the mountains
No one seen
Just us and the sound of our footfall
And the susurration of wind in treetops.

That second night and Dixon’s Kingdom hut
We had it to ourselves at the end of that long summer day
When we entered the ring of mountains through the pass and visited the little stone hut
Hidden on the side of The Temple
So small you cannot stand in it
Just two bunks
And a tiny fireplace
But for which you are thankful
When the weather comes in in all its iciness.

We wandered across the valley
Past cushion plants
Past tarn and lake
Over stiff alpine grasses, past wiry highland shrubs
And ascended the West Wall up steep and loose scree
Our boots scraping on ancient rock
Extruded hot from the earth
So long ago
Before human memory began.
We wandered its length to its highest point.

It was good to be up high, up here between land and sky
So uplifting of mind to look out over a landscape
High above the plateau in a place where most avoid
Visited only by those who yearn for solitude or good company
Amid the peace of rock, pine and tarn.

We sat before descending
And looked out over the the lake-studded flatness of the Central Plateau
A landscape of rock and scattered groves of native pine
Lakes too numerous to count
The product of the Pleistocene glaciation
Gone these past 12,000 years.

It was clear to the horizon that day
As we sat quietly on the rock and gazed eastward
In a state of mind stilled by the grand sweep of landscape and sky
That was almost transcendent.

I remember your red hair
Bushy, I thought
You wore a khaki shirt that weekend
And brown trousers
Your hiking boots not elegant in any urban sense
But functional on the mountain’s rugged wet trails.

I don’t recall seeing you again after that walk
And wherever you are I wonder if you remember those few days
On foot, in the mountains
Days we quickly organised
Packing our packs with food, wet weather and warm clothing
And the other necessities of the mountains.
We climbed into my little blue VW beetle and drove off.

It was the long days of summer when we arrived that weekend day
At the roadside where we left the car
When there was still enough light to climb the escarpment
Through the dripping forest
To the little timber hut at the top
Where we made a simple meal
such as is made by mountain walkers
And a billy of strong tea
And where we spent a quiet night.

I wondered where you went after that trek in the mountains
When the weather was fine that summer
Now long gone like the summer of our lives
Wherever yours is now.

I hope you have found other mountains
And companions to travel them with
And that this brings fullness to your life.

I remember you because I have a black and white photo of you
On that wet and slippery footbridge
Spanning the Fish River that was in spate as we crossed
That afternoon
So many years ago.