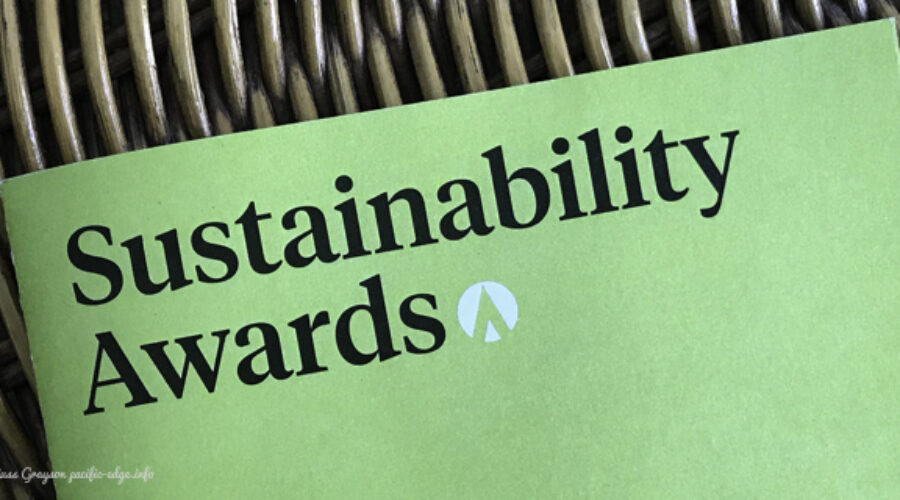 A prototype application of permaculture landuse, building and social design in a local government context

THEY KNEW they were in for tough competition from big projects like Adelaide Botanic Gardens Wetland and Wynyard Walk, but when they were awarded the ’highly commended’ at the 2017 Sustainability Awards, that came as something of a surprise.

“We really didn’t expect it”, said landscape architect and permaculture educator, Steve Batley. “We were up against these big, high-budget projects and ours was so small in comparison.

“What it does show, though, is that thoughtful design rather than size counts for a lot, and that the permaculture design system is now recognised as a valid methodology among the design professions”.

That recognition has been developing for some time. Steve designed the Permaculture Interpretive Garden (PIG) that won the highly commended. Located at Randwick Community Centre and serving as a public park as well as a venue for practical training in the Organic Gardening and Forest Gardening courses offered by Randwick Council’s sustainability unit, the award recognised the integration of components such as kitchen garden, aquaponic/vertical garden array, forest garden, the public reedbed toilet that biomimics the natural wetland to purify wastewater, the propagation shed that uses recycled hardwood in its construction and the wild food and habitat trails presently in development.

The garden forms part of the regional park that includes the Randwick Environment Park with its remnant bush and ephemeral lake, the public commons and the Randwick Community Centre.

The habitat trail will be used in the sustainability unit’s basic science for pre-and-primary schools program. The propagation and garden shed was designed by permaculture-trained architect, Terry Bail, who designed the energy and water efficiency retrofit of the community centre building and the adjacent classroom-on-the-commons. Terry attended the Sustainability Awards event.

The PIG, as it is called, is also used by the weekly Permabees which council sustainability educator, Fiona Campbell, started as part of the community centre’s social permaculture program to offer social interaction and garden skills to local people. The Permabee is led by permaculture designer and horticultural educator, Emma Daniell, and horticultural scientist, Jon Kingston. Recently, Australian Conservation Volunteers has started using the garden for its Green Gym seniors’ program which aims to improve personal health and social contact.

The site… was seen as an opportunity to prototype the application of permaculture principles and ideas in a local government setting.

Still a distance to go

Steve says that despite being accepted by councils and now being more widely applied, the permaculture design systems still has far to travel along the road of professional adoption.

“It’s a bit like applying the permaculture principle of ‘small and slow solutions’”, he said. “It’s the accumulation of smaller projects that comply with the local government regulation, Australian Standards and the Building Code of Australia, and that apply professional design standards to achieve something of public value”.

When the site was handed over to council by the Department of Defence, it was seen as an opportunity to prototype the application of permaculture principles and ideas in a local government setting.

Over the years, what was a poorly-used, bland expanse of low-grade lawn has been turned into a landscape offering a range of active and passive recreation and learning opportunities, as well as significantly improving the area’s habitat value to wildlife. The project was developed as funding became available.

Site development followed the permaculture principle of multiple use, which also increased the range of use options for the site as population density in the region increases. Components integrated into the development include:

Were the educational program to end, the landscaping presently used for food species could be repurposed as habitat plantings for the provision of environmental services.

Permaculture-trained people holding a Permaculture Design Certificate as well as professional qualifications are employed part-time or as consultants for the education and social programs.

Collaborative economics and new economy in the courses are taught by Annette Loudon of Community Exchange Systems Australia. Annette also organises the community swap parties where people exchange goods rather than discard them to landfill.

Past staff include the Inner West Seedsavers’ and the Australian City Farms and Community Gardens Network’s Jane Mowbray, and ex-chef and teacher, Leesa Marie. Documentation of the project is done by the author of this article.

With so many permaculture-qualified designers and educators, it is no surprise that a number of permaculture design principles operate at the community centre.

Permaculture is a platform

The principle of using permaculture as a platform of ethics, principles and characteristics for the development of useful applications such as community/food/schools education, as well as building nature habitat, providing recreation opportunity and applying social permaculture such as community economics, social interaction and participation was adopted.

As a prototype permaculture project within a civic or local government context, the centre was envisioned as a community resilience education hub as well as a public land commons/regional park (a regional park attracts people from beyond the local area) that complements other hubs and organisations in the coastal, urban east.

An approach that regards systems as interconnected and interacting sets of elements coherently organised to achieve some goal was adopted. It took form in the relationship between the different components of the landscape and buildings and the relationship of the educational and social elements of the design.

Any physical entity is surrounded by and exchanges material and energy with its environment. Recognising this, to prevent pollution, wastes on site are recycled; habitat has been planted to increase opportunity for wildlife; and landscaping was designed to provide a range of opportunities for birds, insects, reptiles, amphibians and humans.

Set a vector rather than a detailed plan

A general plan for the development of the site was adopted with users of the site, local sustainability groups, staff and community participation. This set direction, a vector of travel to develop the site. It did not lock development into a fixed timeline with a project schedule or a rigid strategic plan.

The implementation of works along the vector were not planned in detail so as to allow adaptation to changing conditions and to take advantage of opportunities that arise. This enables the project to remain agile.

The network effect states that the value of a network is proportional to the number of active users.

To implement this, a diversity of courses and opportunities, as well as the landscaping of the community centre, were introduced to improved its value to a greater diversity of users, some of whom make multiple uses of the centre and its services. They form a network of users connected by attendance at events and courses and by a regular enews. Some assist in running events.

The site serves as regional city park for active and passive recreation, social gatherings, habitat value and community and schools education. Habitat value complements the adjoining 13 hectare remnant of Eastern Suburbs Banksia Scrub, some of the six percent of the ecosystem remaining.

Multifunction design was also stimulated by the increasing density of population in the region.

Include social design in the design of infrastructure

Permaculture designers involved in the development believe that social design in permaculture should go beyond skills in facilitation, decision making and group organisation. Those are taken care of in the community leadership course offered at the community centre.

The concept of social design was extended to offer a range of facilities and programs that provide for different types and intensity of use. That use is monitored by observation so that facilities can be changed over time. This is part of the ‘agile development’ of the community centre site.

Scale solutions to resources and goals

The site was developed in three phases according to financial and staff availability.

Develop at a pace that effectively addresses the problem

Small and slow solutions were implemented for the food and native plant gardens, larger and more-rapid solutions for physical infrastructure.

Larger and faster solutions catered for emerging community needs and developments in the broader urban area such as increasing population density as well as the temporary availability of funding.

Adapt design through observation and feedback

User feedback and observation of how people use the site allows adaptation of the community centre and the educational program.

The redevelopment of the community centre and its landscaping involved community participation at the start, including participation by local permaculture and transition towns people.

The yield of social return on investment comes through the educational programs and public use of the park.

The energy return on energy and financial investment comes through offsetting energy use at the community centre by selling excess electrical energy from the photovoltaic array and wind turbine to the grid.

Work with those who want to learn

The goal to attract people at different stages of personal or community-based resiliency was informed by professional sustainability education theory and practice:

Free-of-charge courses and workshops (they are funded through a 2.5 percent levy on rates that is voted in every five years) are offered to increase community skills, knowledge and resilience. These are notified through a monthly news, website (reduceyourfootprint.com) and social media.

Work where it counts

Where does it count in Sydney’s Eastern Suburbs?

First, this is a medium density coastal region where more than half the population live in apartments or attached housing. This population is growing as new apartment buildings are constructed. Food, water, energy and community systems taught in permaculture and installed at the community centre need to demonstrate an appropriate scale.

Secondly, there is an ongoing demand for learning resiliency skills. This is evident not only in participation in the courses, workshops and events at the Randwick Community Centre but in workshops offered by the two other local governments in the region. It is also evident in presence of community gardens in the Eastern Suburbs and the active community organisations such as Transition Bondi and Rhubarb Food Coop. These offer an educational avenue towards working where it counts.

Utilise renewable resources where they are available

Renewable energy systems are a core component of the Randwick Community Centre and its educational programs.

Energy is harvested with the grid-connected photovoltaic array, solar water heater and wind turbine. Water is harvested from rooftops and stored in water tanks for garden irrigation and toilet flushing, and is supplemented by bore water.

The use of used building materials for the classroom-on-the-commons and the propagation shed in the PIG, and the provision of bins for soft plastics, hard plastics and metals and old mobile phones collect materials destined for recycling’s technocycle.

Permaculture is about development

Permaculture is about development more than it is about conservation. Permaculture builds and rebuilds things. It modifies buildings and landscapes. The conservation that occurs, whether that is conservation of energy and natural resources, of remnant vegetation or of historical artefacts to provide a sense of use and continuity of an area, is simply part of the permaculture design system’s approach to development. It is integrated into how we, as permaculture designers, do things. It is part of the approach rather than being a prime feature or an add-on.

This is the approach taken in the conversion of Randwick Community Centre and its activities from an unimaginative area of patchy, low-grade lawn into a true multi-use regional park. It is this approach that was recognised in the highly commended reward given the PIG at this year’s Sustainability Awards.

See also: Experience the best teacher in the garden