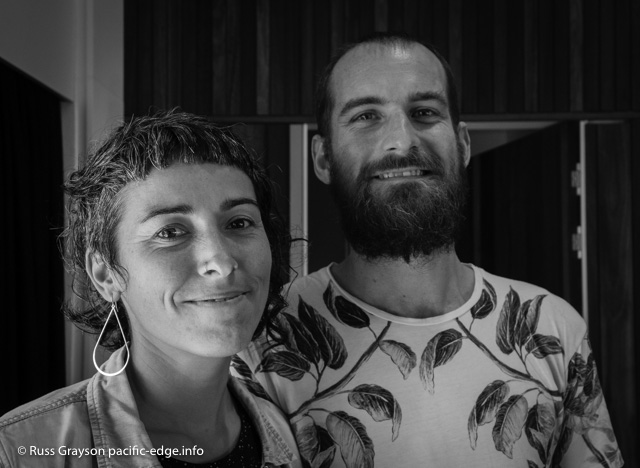 WHAT happens when 250 freelancers, consultants and entrepreneurs in the new economy get together to experiment with new forms of organisation?

They become a network, a structure that all use but that no single person is in charge of, a network that all contribute to, a social enterprise to invent new and better ways of collaborating in the transforming economies we now find ourselves immersed in.

That is the story of EnSpiral Network, a co-op based in Wellington, Aotearoa-New Zealand. Theirs is a model that attracts global interest and that inspires others to do something similar, like Digital Storytellers, the video production house in Sydney.

One of EnSpiral’s better known and widely adopted products is the Loomio software that enables focused discussion so as to come to shared decisions. The software is gaining popularity among both community organisations and NGOs as an alternative to tedious meetings and the use of email in which communications all-too-often go missing.

Richard Bartlett is one of the founders of EnSpiral. With Natalie Lombardo, Richard presented the Patterns of Decentralised Organisations workshop in Sydney at the end of March 2018.

Here’s the problem, here’s the challenge

Here’s the problem and the challenge. Whether they be government, business, NGOs or community organisations we work in, we have inherited structures from the Twentieth Century. Now we find them an ill-fit for the changes taking place in the societies and economies of technologically advanced countries such as ours. At best, they let us plod along. At worst, they are dysfunctional and ineffective. These are the old hierarchies, the tired, top-down structures that hoard rather than share resources as they compete for attention in the public marketplace of ideas.

Now, driven by changing economies and accelerated by new technology, by the need to create livelihoods in rapidly changing markets and to increase the adaptability and agility of organisations, new types of organisations are emerging around the world. They are still in invention, still rough around the edges, but they promise to flatten those old hierarchies and share the power their leaders hoard.

A better fit for our times

From small business they came, from social agencies and consultancies, from social enterprise and community organisations. Patterns of Decentralised Organisations attracted a broad grab-bag of participants.  Together there at the Surry Hills community centre we talked and cooperated, shared and collaborated to define how we could make our organisations a better fit for the emerging conditions of the Twenty-First Century.

Natilie and Richard have funneled the learning gained from assisting organisations around the world into seven points. These we worked through in the workshop. 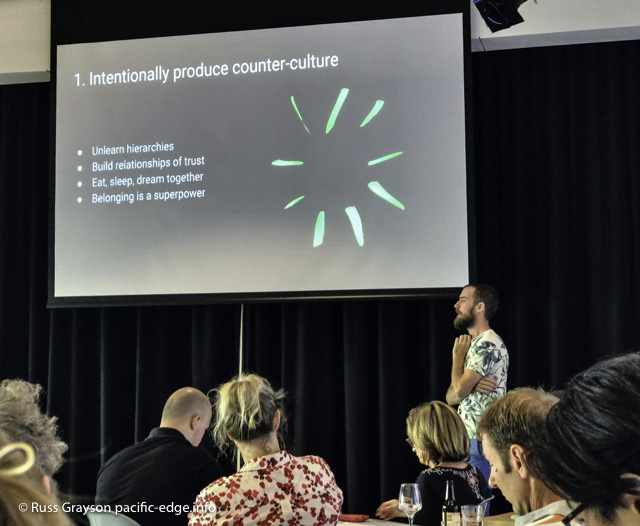 The seven points for organisational renewal

EnSpiral’s seven principles for adaptive and effective organisations offer a new and better way of structuring the work we do, whatever that might be:

In doing this we produce a new culture, a culture counter to the tired old ways, a counterculture. As someone said, the future belongs to small, agile organisations.

When making sourdough bread, said Richard, we use a started dough, mix it into the ingredients and then fermentation happens. Out of that comes a new loaf. To move this analogy to the organisations we work with requiries us to unlearn the model of the hierarchical organisation we have been conditioned to, and to develop trust. We take that starter dough, those new ideas, and mix them into the tired body of the old organisation to ferment something new and effective —adaptive organisations that are a better fit for the times.

Doing this requires the trust that allows peaceful disagreement. Along with it comes building a sense of belonging in organisations. “Belonging is a superpower”, said Richard. In doing this we produce a new culture, a culture counter to the tired old ways, a counterculture. As someone said, the future belongs to small, agile organisations.

The EnSpiral crew find that going somewhere different to their day-to-day environment, on a retreat, is a good way to form trust and a sense of belonging.

This second principle is about sharing work fairly. We can ask others ‘How can I support you?’. Doing this, we give and get support. This is practical support based on caring and being cared for. We must recognise this ‘care labour’ as actual work, Richard emphasised.

Effective in doing this is the EnSpiral practice of the monthly coffee with someone and supporting them in their work, a one-to-one relationship that lasts through the year before another is formed.

Ask this question: How do we want to be together? According to Richard, doing this makes norms and boundaries explicit, expectations clear and anticipates conflict.

Defining norms and boundaries creates a safe operating space. We need an explicit agreement on this, says Richard, and we need to review it periodically.

We can take turns in roles with power so as to distribute it, encouraging others to step in. We need to make power explicit: who has it? How do you earn it?

Important is discussing a group’s inequalities in a peaceful way. We can do this while recognising that some people have specialist knowledge that inadvertently gives them power and influence in decision making. We need to trust them to use this power in agreement with others, as we will not have the knowledge or experience to do that ourselves. An example would be a team member with specialist technical knowledge that other members lack.

Hearing this, it reminded me of David Holmgren, the co-founder of the permaculture design system. David said we need to be jacks-of-all-trades-and-masters-of-one. Applied to an organisation, it says that people like online systems or communications specialists should be given the power to strongly influence decisions rather than leaving decisions to the less-experienced. Doing this is based on trust.

… it is best to make decisions online rather than in person.

Long, boring meetings that run out of time and put decisions off to a future meeting are all too common among voluntary community organisations. It should come as no surprise that the people who invented Loomio decision making software would say it is best to make decisions online rather than in person. This allows decisions to be made in a timely but unhurried way.

Meetings, it is Richard and EnSpiral’s experience, are better used for brainstorming, building trust and bonding. Discussion around the decisions we need to make can happen at meetings whether in-person or online. A date is set for making the decision and someone volunteers to remind people of the date as it approaches. The time to the decision allows participants to think over the ideas around the it and to come to a well-thought-out decision of their own.

The use of Loomio avoids the need to wait for meetings to make decisions because preparation can be done asynchronously rather than at the same time with everyone present:

a) Reports and readings are distributed online.

b) People tick a tickerbox to show everyone they have read the material. This encourages reading and avoids wasting time in meetings reading documents like the minutes of the last meeting and budgets.

c) Having read the documents, meetings are used for discussion around the decisions, but decisions are not made at the meeting. The meeting is where people make sense of the decisions to be made.

d) Desisions are made later on Loomio. A facilitator is appointed to ensure they are made.

This process shifts the dynamics of meetings and eliminates the time pressure that is a common meeting experience. That forces decisions to be made before everyone has explored the issues or puts off decisions to a future meeting, delaying the work of the organisation.

6. Agree on how you will use technology

Natalie described a system of technology adoption for the effective running of organisations. This suite of software includes applications for:

There are numerous tools suited to organisational use. An organisation I work with uses Zoom for video meetings, Trello for planning (Trello is a kanban system), Slack for asynchronous discussion, Loomio for focussed discussion leading to a decision.

Natilie outlined the process for adopting new tools that EnSpiral has found useful:

Introducing new tech can make decision making harder. This process can ease it.

7. Use rhythm to cut the information overload

EnSpiral use a version of Agile Planning to create a rhythm that drives their work. A product of the software development industry, Agile Planning is being adapted for other applications and, in a modified version, can be used to make voluntary community associations and NGOs more effective.

Agile brings what it suggests — agility — as well as accountability. It moves through successive phases: 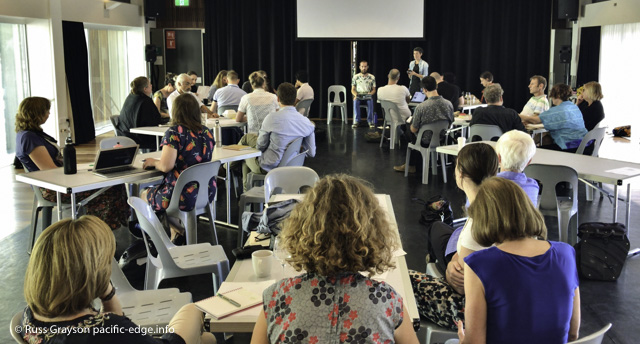 Richard and Natilie at the Patterns of Decentralised Organisations training.

When a bunch of people get together to learn and think through something, a buzz, an enthusiasm builds. That is what happened at Patterns for Decentralised Organisations.

For those motivated to try the ideas from the workshop there will be challenges, especially that of organisational inertia. Inertia is a behaviour of a system in which the system seeks a return to stability after disturbance, such as defaulting to established practices. It can take the form of staff or member resistance to new ideas, however when new ideas are compelling they can move a system to a new equilibrium.

This was a worthwhile workshop that exposed participants to new ways of structuring organisations, ways that have been developed and adopted by the EnSpiral Network. They can only update and benefit Australian organisations. Let’s adopt them now.

ORID – strategic questioning that gets you to a decision

Participatory Learning and Action — and how to use it

APC14 — impressions of a permaculture convergence

THE STRUCTURE OF PERMACULTURE — understanding the network