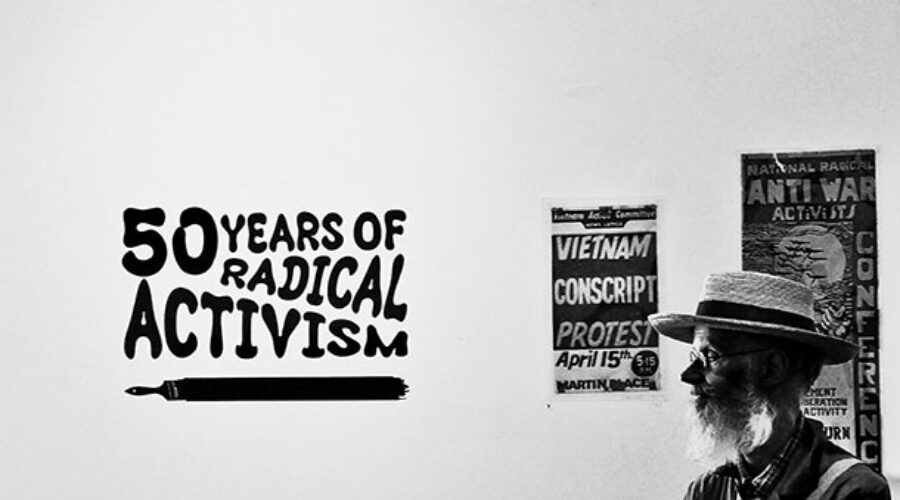 A FINE, mild Saturday afternoon in October 2015 was a suitable day to remember the late John Percy. As 4pm approached, the building at Addison Road Community Centre was almost full and would soon be standing room only.

I had arrived a little early and on entering the building found twenty or so women and a couple males sitting in a circle singing songs… something about “reclaim the night” and “give me bread but also give me roses”. Others walked around looking at some of John Percy’s collection of posters reporting in graphic form Sydney’s radical history these past 50 years, the same 50 years of his own radical activism.

…I realised that there in front of me, still in full voice and still enacting their life work of a fair go for all — were some of the pioneers of the womens’ movement in this country…

I learned that this singing session was a prelude to the celebration of John’s contribution to building a better society in Australia, in the world, in fact. As they were packing up one of the women asked me if I had sung along but I told her that had she ever heard my singing voice she would never ask that question.

Those women… there was an age range but most were well into middle age or a little more, perhaps… I realised that there in front of me, still in full voice and still enacting their life work of a fair go for all — were some of the pioneers of the womens’ movement in this country. I thought that my friend, Yvonne Gluyas, who participated on that movement in 1970, would have been right at home here this afternoon.

Between the singing and the start of John’s memorial meeting, as I was wandering the poster display, there appeared a familiar face-without-name. It was Paul and we had last seen one another while studying the communications degree at UTS. That was the mid-eighties. We caught up as people do when encountering one another after the passage of considerable time and I learned Paul had taken up photography as he showed me his new Nikon digital SLR he carried in his bag. So we talked photography for awhile, of how he hopes to avoid the GAS (‘Gear Acquisition Syndrome’, an affliction of photographers attracted to new photographic technology) and then got onto politics, Paul explaining how the nearest he can come to describing his own political values is as a Social Libertarian.

We discussed how libertarianism, like socialism, comes in a range of flavours and that what he described was what I know as Left Libertarianism, and that UK engineer and science fiction writer, David Brin, has written about it on his website. It is substantially different to the Right Libertarianism you find in the US. He recommended reading Murray Bookchin’s collection of stories, The Next Revolution: Popular Assemblies and the Promise of Direct Democracy.

The only show in town

Let’s be clear about a minor historical point.

Unlike these days when youth sensibly distances itself from worn-out, mainstream political parties, if you wanted to make a better society in the late 1960s, if you wanted positive social change, it was more or less a given that you would drift into the New Left. The movement was so-called to distinguish itself from the old Left, the rump remnants of Stalinism and from the staid socialist conservatism that had gone before, and it embraced the youth culture of the times… its music, its dress, its laize faire attitudes to life. Really, if it wanted to attarct young people it had little choice.

For change-makers, the New Left was the only show in town.

Diane Fieldes is a tall, slender woman whose long hair was probably once blonde and is now a sleek grey in colour. She’s a veteran of the political movement John set up, first meeting him in the 1970s. Before she launched the official program for the afternoon, it was the turn of two young guys and their large yellow-brown dog who are walking from Queensland to Melbourne raising money for a Vietnamese orphanage, home to children the intergenerational victims of the Agent Orange defoliant the US forces sprayed to deny tree cover to Viet Cong guerrillas during the war in Vietnam. They walked away not only with the donation from the organisers of the memorial meeting but with funds from an anonymous woman donor who wrote another cheque after the proceedings.

… SCREW — the Society of the Cultivation of Rebellion Everywhere…

This was a positive note, one of people taking direct action on heir own initiative, upon which to launch the event. In introducing it, Dianne explained that it would follow a chronology from the start of John’s work in social change in the late 1960s to the present time. And to get things going, here to talk about those early years is… Bluey Fisher.

Whaaat? Bluey Fisher? Can it be? Well, something like that ran through my brain at Dianne’s mention of Bluey. Yep… there he was… still recognisably Bluey… still that same Australian working class voice. How long had it been? Last I saw Bluey must have been… let’s see… 1969 maybe… 1970?

Bluey described how he had come across SCREW — the Society of the Cultivation of Rebellion Everywhere — and how this had morphed into the Leftist youth movement that became known as Resistance. As Bluey talked images of those times he and I had shared came and went in mind, and there, still, was the sense of humour he had back then. Yep, it was still Bluey and we spent a good portion of the time after the official event talking. Bluey has had his struggles with his health but he seems to be living a fulfilling life in his home town of Adelaide. It was good to see him again and as I said farewell to him after the event I hoped we could catch up some time again.

Helen Jarvis, Max Lane, Roberto Jacquera and Sarah Garnham continued the chronology of John’s life and accomplishment to the present time, a continuity represented not only in the stories told by the speakers but by their age ranges.

Max, his still-blond but thinning hair combed back and wearing one of those colourful, patterned shirts people bring back from Bali or Indonesia, has like Bluey had had his struggles with his health.

He emphasised the importance of documenting the history of the movement John had a hand in starting in the second half of the decade of the sixties — it was then known as the New Left — so those now coming into the milieu could understand what had come before and, perhaps, derive learnings from it. Max kept on track by glancing at his little black notebook from time to time but most of his talk came straight from his brain… and his heart.

Sarah Garnham’s was the young voice that followed those mellowed by age of the earlier speakers. Dark hair tied back in a bun and fresh-faced, Sarah brought us into the present, and that was an appropriate place to end for this succession of speakers representing a succession of generations had encapsulated the times and the events of John Percy and, in all too brief a time to do it a great deal of justice, had painted a word picture of an authentic life lived in service to humanity.

A beer, a conversation

Over a beer after the official event I had a brief conversation with an earnest-sounding young man. He asked me if I missed those early days of the late sixties. I said no, it’s not that I miss them because they have gone and they were the product of the times and all those things that go into creating the social, economic and political milieu out of which the New Left emerged. Talking about the times to others who were there, as well as with people who are too young to have experienced them, might contain an element of nostalgia but it also serves us who were there to understand them better through the sharing of information and memory. Yep, we’re still learning about what we did and what we went through.

We also talked about the need for the Left to discard its factionalism, a relic of past times, and to participate in broad coalition of organisations and people to make a better Australia and a better world. Rather than focus on sometimes rather obscure and trivial theoretical differences, why not focus on what all agree on and act of that? Agree to disagree on the rest and set it aside while building a unified social movement. Surprisingly, this young guy said he was in agreement with this and, looking in from outside the movement now, he said that some of the political disagreements appear trivial and inconsequential to everyone other than those engaging in them.

Day turned to evening as Eva and I stood there outside the building and I learned of her own, of John’s and of their shared life together, and those decades after I and Paul, who I mentioned earlier, and Bluey and so many others had left following the famous Bob Gould/Percy split around the Third World Bookshop and the associated youth movement, Resistance, were filled with the story Eva told me. It was a story of disappointment, internal political wrangling and occasional expulsions. But it was also one of progress and movement-building and of John Percy’s doggedness. That tenacity reminded me of one of the principles of personal effectiveness defined by Stephen Covey — ‘keep the main thing the main thing’. I don’t know if John even encountered Covey’s work, however his persistence in pursuing a political path to social change provides a good example of that principle.

Night had come by the time I said farewell to Eva and Bluey and we expressed the hope of encountering each other again. As I set off down the road I looked back and there, in the light below the awning of the building in which we had remembered John and his work was that little knot of people engaged in conversation, so reminiscent of little knots of people engaged in other conversations over all those years that John Percy had offered the disaffected, the reformers, the revolutionaries and those hopeful of a better future the benefit of his own learning and wisdom.

We said goodbye to John yesterday afternoon. Around 100 gathered in the restored Art Deco ambience of a room in

Figure in a window

” …WHITLAM’s  in power and the war’s ended… for us, anyway, the yanks are still there, still involved in that